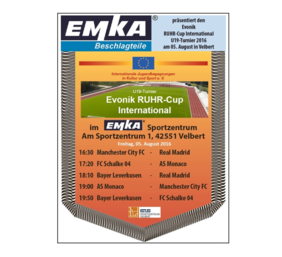 Who will become the next UEFA- or FIFA-Champion?

This year EMKA once again co-hosts the Evonik Ruhr-Cup International. The tournament gives young football players the chance to play in an internationally high competetive tournament like there is no other around the world. EMKA is proud to have teams like Real Madrid, Manchester City, Benfica Lissabon, Bayer Leverkusen and FC Schalke 04 playing at the EMKA Sportcenter in Velbert on August 5th, 2016.

In recent years international top stars like Leroy Sané, Emre Canor evenFIFA World ChampionJulian Draxler found their way to Velbert. Let's hope to see not only fair and exciting matches but one or the other rising star that will be recognised in the near future. Who knows which player will follow Renato Sanches: UEFA European Champion 2016 with Portugal and best player of last year's Ruhr-Cup International in Velbert?