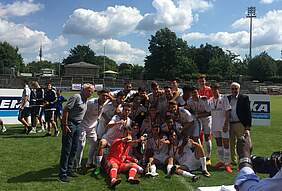 EMKA congratulates Real Madrid for winning the EMKA Ruhr Cup International 2017. Real Madrid beats Borussia Dortmund 3:1 in a final that went down to the wire. Especially in the first halftime Borussia Dortmund was the better team only to miss their goal-scoring opportunities before Real Madrid shows why they are the most successful club in the world.

An almost bizarre anecdote was shown in the play-off for 7th place: AS Roma against Rapid Vienna. It ended with a 0:0 to let the penalty shoot-out decide who’s winning. It took 28 penalties to have Roma win by 14:13.

Voted player of the EMKA Ruhr Cup International 2017 is Julian Schwermann from Borussia Dortmund while Jason Ceka from FC Schalke 04 is top scorer with five goals.