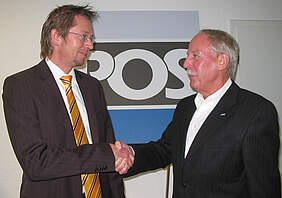 EMKA continues to expand: The EMKA group with its headquarters in Velbert, took over the Velbert enterprise of Paul Oberholz und Söhne Schloss- und Beschlagfabrik GmbH (POS). The business was notarised on Monday (November 17th, 2008). Approximately 50 employees at POS in Germany and Poland will retain their jobs, according to EMKA owner Frie.dhelm Runge. Concerning the purchase price no details were given.

„We are very pleased with the successful conclusion of negotiations. We realise the importance of such a long-established company“, said Runge. POS has been experiencing declining sales, according to its previous statements. „It is our intention to regain the lost customers. From our position there is reasonable hope of this. The previous POS staff should help us to succeed.
The first step of the move to the EMKA headquarters at the Langenberger Straße site in Velbert and to the site in Wuppertal should take place this year. „We will substantially expand the product range“ Mr. Runge announces.

With our development, construction, production and storage facilities as well as the world-wide sales, we are in no doubt that the company eminently fits our profile.“ POS is a specialist in closing systems, locks and latches and a supplier to the automotive industry as well as the recreation vehicle and truck industry.
The family-owned enterprise was founded in 1948 in Velbert. In the beginning they produced locks and latches for HVAC systems. In 1960 a second plant was added, focused on subcontracting for the automotive industry. The first closing, safety and fastening systems were delivered in 1965, starting from 1982 handles and accessories for automobile door panels followed. In the golden age of the 1970 POS had up to 300 employees. Since 1996 the company belonged to the Zeppenfeld group. Significantly important POS customers are companies such as VW, Audi, BMW and Land-Rover